The evening came and went like a thief. I found some sleep and was ready to tackle what was ahead. Arriving at Bikes&Py just after they opened, their mechanic was able to reseat my shift cable within ten minutes. We spoke with the owner as we browsed through this beautiful shop, grabbed a few CO2 cartridges, and some chain lube, and were off back to the hotel to meet Matthias for the ride out.

My teammate and friend Matthias Van Aiken, (who also had a late arrival and late-night), was here to work in support of the race, lead the rides, and also do the race on Sunday. To frame this setup, I was now cycling out to a major HC (beyond category) climb, with two elite cyclists who have had top 20 and podium finishes around the Globe, including GFNY races. I would be able to watch and learn for a time, but most importantly, get some feedback from each of them about the climbs, the race, the course, and everything cycling. An insider’s perspective is that even in traveling to as many races as I do, is not always right there for the taking as it now was.

Taking the green path out along the Ousse River, and out to the main artery that connected Lourdes to most of the area climbs, was a fast and satisfying way to wake up the legs, and get back in form. I had not been on a bicycle now in at least 10 days, and so I was in a minor state of panic about my ability to rise to the occasion. But it felt good. There was sunshine, conversation, and everything great about cycling until we finally arrived at the foot of Luz Ardiden. 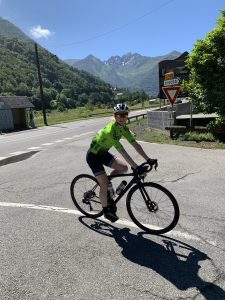 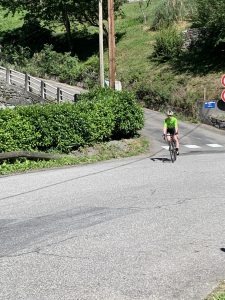 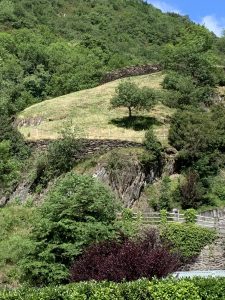 Without getting into too much detail the argument at the foot of this climb was not about whether or not to do the climb, but which route to take. Jill had heard from friends of hers, that the best parts of the iconic climbs were always to NOT follow the routes that Le Tour de France follows, but rather the other sides. Having seen a few of the routes taken by Le Tour, and some of the alternatives, my own view is that it depends on the climb. But in this case, I was game. To give you a good idea of the skill level I was dealing with, Jill’s idea of a souvenir from a new country she is visiting is to score KOM/QOM for a particular climb. Before we even set out, Jill was fully in tune with what she needed to do to bring home the bacon on the first climb but had some doubts about whether she could do it.

Moving across the pond to Europe provides a very different level of competition than we see in North America. Jill was not allowing herself to be lulled into a false sense of complacency about her own skills, but rather going into each effort with respect for the European climbers that had come before her. She would take this approach all the way into race day — taking nothing for granted. This, friends is how a professional prepares.

Finally, we agreed, that we would take the road less traveled. Jill was grinning from ear to ear as she exclaimed “Oooh it’s a steep start”.
“How steep?” I asked.

She and Matthias were quickly away and fading out of sight. I was mumbling to myself as I started to granny gear it up. Mumbling to myself. “Very!’ Thanks Champ — really helpful”. As my contemplation of the grade evolved, I was passed by a local about my age shredding up the climb on a flat bar e-bike. It was here that I started to count the dollars, shoes, helmet, bad-ass carbon frame, groupset, blah, blah, blah — all to be completely housed by an e-bike, as the sound of the voices and sights of Jill and Matthias faded away.

We were on the back side of Luz Ardiden, and like many other climbs, would meet the main road to the summit somewhere around 5 or 6 kilometers away from the top. Because we went the “non-Le-Tour” route to the summit finish, I don’t have official stats, other than roughly a 7.5% average grade, over about 14km. Making a right turn from out of the wilderness with about 4–5km to go, onto one of the beautiful ribbon-like roads I came to love so much in the Pyrenees, the climb began to wind and switch back in a beautiful way. Cyclists with huge grins on their faces descended most riki-tik from the summit one by one, and sometimes in pairs. About 1km from the top, I had to take a guess and make my way left or right. I chose left, unaware that at the summit Matthias and Jill were watching me choose and willing me to go left. Stopping only to answer a text from Matthias, I let him know I was not far to go.

Meanwhile, at the summit, the wind was kicking, and the temperatures were about 10 degrees lower (Fahrenheit) than where we started. As I hit the summit, we were able to take some photos and quickly make our way out. The great news about the ride was that it was mostly downhill and flat from here. In fact, that was a theme throughout the week. When you got to the top of the mountain, you were usually halfway home. (The fast half). 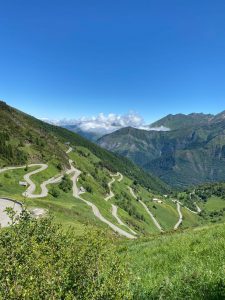 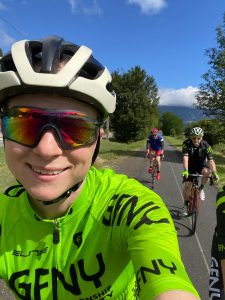 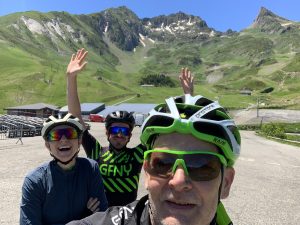 Jill was dubious about her time up the mountain and as of yet unsure if she would grab the trophy for the climb. So we made our way down, and headed back to Lourdes, for stretching, lunch, and coffee. Upon entering the bike room at the hotel, all of Jill’s data reconnected, and there it was. QOM for Luz Ardiden via Viscos. BAM — souvenir achieved for the champ, everything else would be gravy. 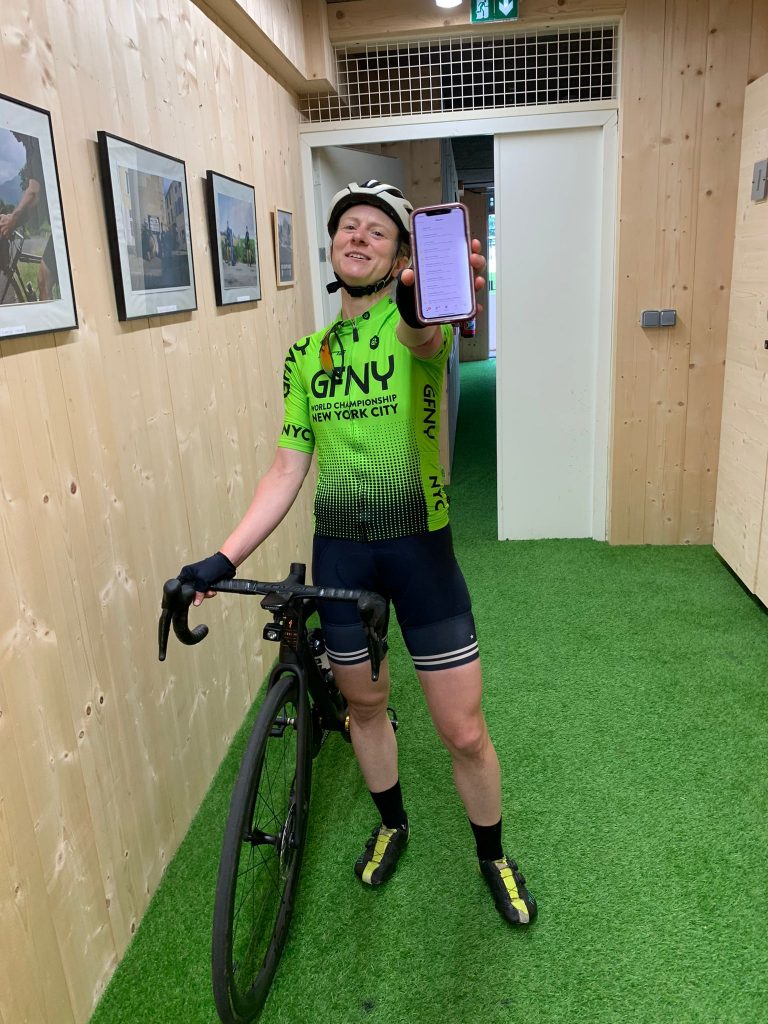 And Speaking of Gravy

Tooling around Lourdes the night before on foot, in search of a place to sit, practice my French, and order something great for dinner, I was, as I often am, hampered by my own lack of confidence. While I work at understanding and speaking French, I know what to say, when to say it, but as soon as I am presented with a person and they speak rapidly, fluidly, my confidence heads out the back door and often leaves me stammering like an idiot trying too hard to fit in. But such is a city of miracles. The waiter at the brasserie across from the hotel deduced from my French that I was American, and introduced himself as being from Portugal, the same area that was home to GFNY Portugal in 2018. We had a lot to talk about.

And as he introduced me around to his colleagues, he pointed out the sign that made me feel right at home. The 4/5 Express train sign read “Uptown and the Bronx”. Dinner was going to taste good. And as the week evolved, my confidence slowly returned. I would continue to use this brasserie as a comfortable place to sit and enjoy as I did in having coffee with Matthias that afternoon after Luz Ardiden. Breaking from my habit of a black coffee my friend from the night before presented me with a noisette. A foamy, milky latte with espresso in a larger cup. I never drink coffee with milk, but I was compelled to have two. 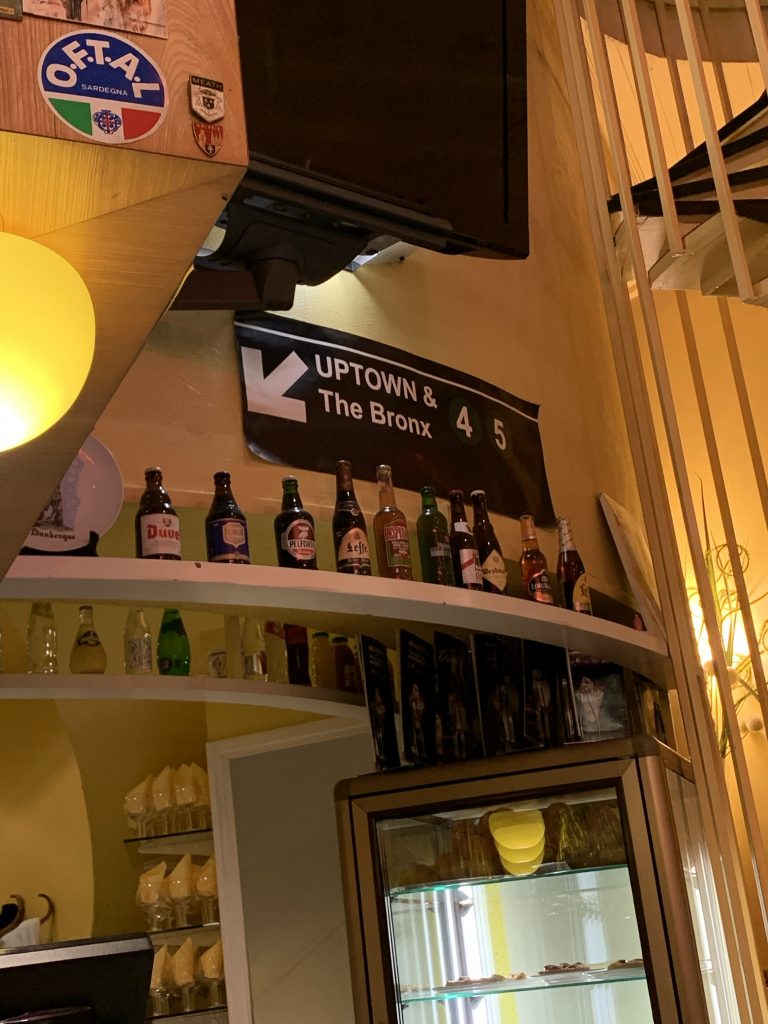 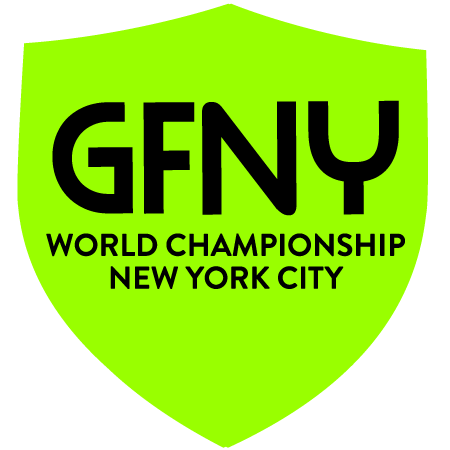